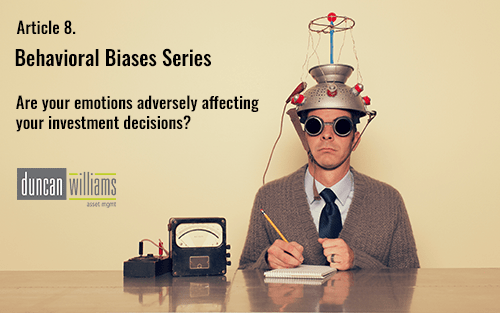 This week we take a look at hindsight bias. The hindsight bias is also referred to as creeping determinism, and the knew-it-all-along effect.

The hindsight bias refers to a person’s belief and tendency of having predicted the outcome of an event when, in reality, there was no sure way of knowing the outcome. This is a fairly common phenomenon that most people tend to take up at some point of time in their lives―some, more often than others. There are varied nuances to this occurrence and the effect of harboring and encouraging this tendency can lead to limitations in any decision-making process.

The simplest way to explain the occurrence of this phenomenon is with the term ‘I knew it’. Have you ever had an experience where you (or anyone else) has looked upon the outcome of something and said, ‘I knew it’?

A great example of the “I knew it” bias is shown below.

“All though we gave him all of that money and support, I always had my doubts that Jim could build his own helicopter.”

So what implications does hindsight bias have for investors?

According to Michael M. Pompian, author of Behavioral Finance and Wealth Management “the effects of Hindsight Bias can have harmful effects for investors as seen below.

HINDSIGHT BIAS: BEHAVIORS THAT CAN CAUSE INVESTMENT MISTAKES